In 1972 the Rolling Stones marked their first decade as a band with the release of Exile on Main Street and a summer concert tour of America that set new standards for magnificence in live performance. Covering the tour for “Life” magazine, photographer Jim Marshall captured indelible moments of the Stones in their glory onstage, as well as the camaraderie behind the scenes. Featuring a foreword by Keith Richards, this volume presents Marshall’s shots that include dozens of never-before-seen frames. Fans celebrating the fiftieth anniversary of the Rolling Stones will revel in this unprecedented look at one of the biggest rock bands of all time from the photographer who captured them best. 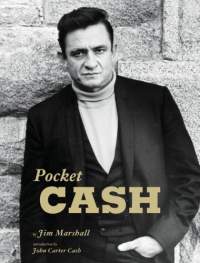 Completed just before legendary music photographer Jim Marshall’s death, Pocket Cashbrings us unique moments from the illustrious career of The Man in Black. From never-before-seen photos of intimate gatherings to iconic pictures of his live recordings at Folsom and San Quentin state prisons, this is a visual tribute to the legendary signer, and to his wife, June Carter Cash. Billy Bob Thornton and Kris Kristofferson offer personal recollections, while John Carter Cash, in a heartfelt introduction, shares memories of his world-renowned parents and reflects on the unique artistic eye of Jim Marshall. Pocket Cash is a covetable collection for loyal Cash fans everywhere and a testament to the talents of an extraordinary photographer. 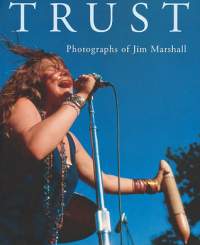 Even if you don’t know legendary rock photographer Jim Marshall, you know his photographs: Jimi Hendrix setting his guitar on fire onstage at Monterey, Johnny Cash flipping the bird onstage in Folsom Prison, Miles Davis boxing at Newman’s Gym, Jim Morrison taking a puff and more. Marshall’s book is filled with never-before-published images mixed with his classics, along with the stories behind them. Marshall explains his access to the biggest names in rock in the forward, “Whenever anyone asks me how I got the photographs I did, why I was often the only photographer present or got such unique access, I reply simply, ‘Trust.’ “ 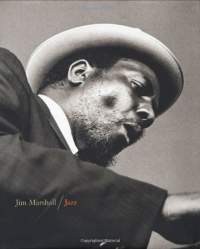 An unexpected trove, Jim Marshall’s portraits of the jazz greats are as wonderful as his legendary work with rock musicians (most recently enjoyed in Jim Marshall: Proof). The access his subjects allow him and their obvious ease around him give these photographs an unequalled intimacy. This portfolio of Marshall’s favorite shots shows the classics of jazz onstage, backstage, in the studio and also in their kitchens and living rooms. Ray Charles, Duke Ellington, Sarah Vaughan, John Coltrane, Miles Davis, Thelonious Monk, Coleman Hawkins Marshall’s images capture these faces and many, many more in authentic and unguarded moments. Jazz critic Phil Elwood provides an introduction, and captions throughout present Marshall’s reminiscences in his own words, making this book a must-have for both jazz and photography aficionados. By turns illuminating and haunting, Jim Marshall: Jazz confirms his place as one of the great portrait photographers.

Photographs by Jim Marshall, introduction by Philip Elwood.
Chronicle Books 2005
Out of print but available in the aftermarket 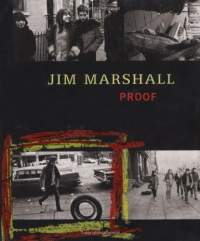 The Beatles racing across Candlestick Park at the end of their final public performance; Johnny Cash pausing to give the camera a middle finger salute before playing for inmates in San Quentin; a weary Janis Joplin backstage, keeping a whiskey bottle company. Jim Marshall captured each of these iconic images with his camera. But what of the other shots taken during these legendary moments? For the first time, Marshall shares his contact sheets from the sittings, concerts, and sessions that surround his most famous pictures. Over sixty proof sheets are featured in their entirety, along with the final chosen hero shot on the facing page. This book sheds new light on Marshall’s talents for revealing on film the essence of his subjects, from celebrated musicians, actors, writers, and performers, to everyday people from San Francisco to rural Appalachia. A rare glimpse into a great photographer’s creative process, Proof provides a behind-the-scenes look at the making of some of the most preeminent images of our time.